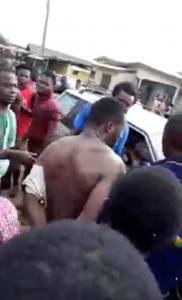 The Ogun State Police has arrested the most notorious thief operating in Ijagun, Ijebu-Ode in Ogun state, was recently arrested by men of the Ogun police command.
According to reports, the thief who is identified as ‘Joe’, a name he was known with while he was an undergraduate at the Tai Solarin University of Education (TASUED), had been terrorising the whole of Ijagun village in Ijebu-Ode, before he was caught.
It seemed to be his lucky day, as the villagers chose to hand him over to the police, instead of carrying out jungle justice as most irate mobs have been known to do.
Source: ( Naij.com )