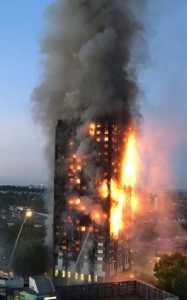 The Apapa area of Lagos State was been in total Mayhem as a policeman attached to Diamond Bank on Burma Road allegedly shot dead three trailer drivers, in response to the death of the drivers an angry mob set the Diamond bank on fire as the management of the bank refused to release the trigger-happy policeman to the mob.

It was gathered that a trailer driver wanted to park in front of the Diamond Bank since the entire Burma Road had been overtaken by indiscriminate parking by trailer and tanker drivers.

A policeman attached to the bank was said to have objected and in the process, a brawl ensued. The policeman was alleged to have fired at the driver, killing him immediately, while two more drivers were also shot dead as they tried to intervene.

A source in the area told PM News that the policeman retreated into the bank after allegedly carrying out the act.

Trailer and tanker drivers were said to have regrouped and demanded from the bank to hand over the policeman to face jungle justice, but the refusal of the bank proved fatal as the mob set the bank ablaze.

The policeman was said to have escaped. Anti-riot policemen have been drafted to the area to maintain peace. Policemen are now patrolling the area to forestall more crises.

An eyewitness in the area said other banks have closed down for business to avoid being attacked by the truckers as tension brew in the area, especially banks on Warehouse Road.