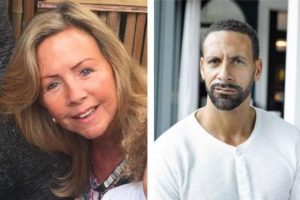 Former Manchester United and England Captain, Rio Ferdinand has lost his mother, Janice St Fort to cancer who died aged 58 in London Bridge hospital on Thursday following a battle with cancer, according to a statement by the family.

Rio, brother Anton and the family said: “We are heartbroken to announce that our amazing mum Janice passed away today after an ongoing battle with cancer.

She was an inspiration to us all and was loved by everyone who knew her. She died at Guy’s Cancer Unit, London Bridge Hospital, with her loving husband Peter and us, her four children, at her bedside.”

The former England captain, 38, was left devastated by the death of his wife Rebecca Ellison in 2015. He filmed a  BBC documentary titled ‘Being mum and dad’ in which he opened up on his struggle to move on from the loss and be a role model for their children.