In what will come across as a really shocking development, a woman has become best friends with a calf believing it is her dead husband who reincarnated. 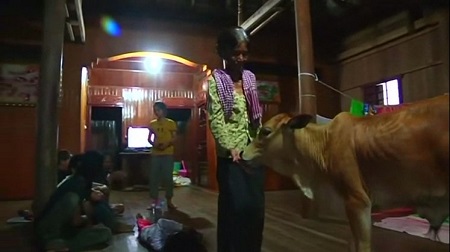 Khim Hang, a 74-year-old woman from Cambodia’s Kratie province, recently made news headlines around the world, after it was reported that she shares her home with a 5-month-old calf, which she believes is a reincarnation of her dead husband.
Oddity Central reports that Khim was devastated by the sudden death of her husband, Tol Khut, a year ago, but she is convinced that he has come back to her as a calf.
Born in march, the young cow believed to be Tol reincarnated, allegedly has some of the man’s habits, and only licks the hands of his relatives. For this reason, he is allowed to spend time in the family home, and is even tucked into bed at night by Khim and her children.
“I believe  the calf is my husband because whatever he does … is in exactly the same way as my husband did when he was alive,” Khim Hang told Reuters. “When I went to see a medium, his soul came in and said, ‘I am your husband.’ Then I noted that he licked my hair, then my neck, then kissed me so that really made me believe that he is my husband”
The calf now spends a lot of time with Khim and her children, likes to stay in Tol’s old room and look out through the windows, just like the man did, and even sleeps on a bed of covers, with Tol’s favorite pillow.
The family have set up a small altar complete with flowers and photos of the deceased man, by the bed, and always make sure to tuck the calf in at night.
At just 5-months-old, the calf is now  minor celebrity in Cambodia. People can’t stop talking about him, and some even journey to Khim’s house to see the animal for themselves.
“I thought it was quite unusual to see a cow go up to the house like this, so I came here to see it for myself,” said Thach Vin, who visited the calf after seeing a video of him on Facebook.
“I will keep him and take care of him my entire life,” Khim Hang said.
But just in case something happens to her, she has made her children promise to look after him.
They have to cremate or bury him, just like a person, when he dies.
Watch a video of the woman below: