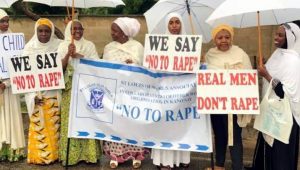 Hundreds of women defied an early morning downpour in Kano and took to the streets on Tuesday in a rally against rampant cases of rape of girls and minors in the state.

The protest march,which was organised by old students of St, Louis Secondary School, Kano, and some professional women bodies in the city, was aimed at drawing attention of the authorities to the phenomenon.

The women, carrying placards with inscriptions such as “Real men don’t rape”, “Enough is enough” and “We say no to rape” said they would march through selected streets to the Kano House of Assembly.

A leader of the women groups, Nana Gwadabe, is scheduled to address reporters at the end of the protest.