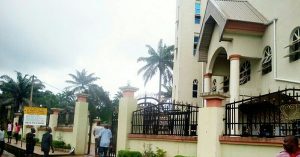 A victims’ support fund has been set up by the Catholic Diocese of Nnewi to cater for the victims at the St. Philip’s Catholic Church, Ozubulu on Aug. 6.

The Bishop of the Diocese, Most Rev. Hilary Okeke, who was represented by Rev. Fr. Hygi Aghaulor, Director of Social Communications of the Diocese, announced this in Nnewi on Wednesday.

“The Catholic Diocese of Nnewi has decided to do all it can to help the victims of the gunmen attack in St. Philip’s Catholic Church, Ozubulu.

“To do that, the Diocese has opened a bank account to which all funds for the care of the victims will be deposited for proper accountability.

The diocese also gave the names of the dead and survivors of the attack.

“The following is the record of victims of the attack which showed that 20 were at various units of medical attention while two had been discharged.

“May God grant these martyrs eternal rest in our home in heaven,” it stated.

Meanwhile, the Anambra Traditional Rulers Council wants the state government to urgently constitute a high powered Commission of Inquiry into the immediate and remote causes of the church killings in Ozubulu.

They said that such commission should be vested with powers to thoroughly investigate the immediate and remote causes of the unfortunate event and make recommendations.

According to the monarchs, now is not the time for hate talks but a period of mourning and sober reflection.

“We are particularly concerned that this criminal act took place during service in a place of worship and its a most ungodly act and a desecration of the highest order of a dedicated place of worship.

“We condemn in the strongest terms such dastardly and cowardly act of wasting the lives of innocent fellow human beings, and affirm that the Almighty God is the sole giver of life and it is not in the power of any human being to unlawfully waste the lives of others.

“We call on the law enforcement authorities to without fear or favour, spare no effort or time in arresting and bringing to justice everyone who was directly or indirectly involved in perpetrating this beastly act,’’ the communiqué said.

The traditional rulers, cautioned people against making unguarded statements that would inflame emotions.

They lauded Gov. Willie Obiano of Ànambra for his prompt response and proactive address to the people to remain calm while investigations continue into the matter.

They also called on the government and people of the state to set aside a date for interdenominational mourning of the dead and supplication for God’s intervention to avert a recurrence in the state.