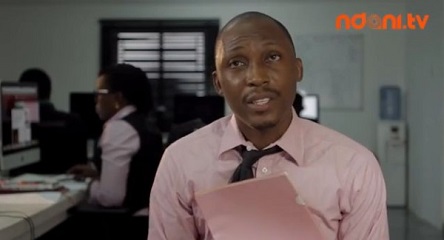 ‘The Wedding Party’ star actor, Kunle Idowu a.k.a Frank Donga, who came to limelight with his social media comedy skits, has revealed just how passionate he is about unemployment.

Frank Donga who had a chat with Saturday Beats, revealed that he is a Masters degree holder and had a job when he was shooting the series, however he has always been fascinated about unemployment.

“I have degrees in Agriculture. My first degree was in Animal Science and I have a Master’s degree in Animal Genetics. The Frank Donga Interview series online about a clumsy young man looking for job in Nigeria became a reality because I am passionate about unemployment. The truth is that I was gainfully employed when I started The Interview series online. I have always been passionate about young people who go to school, spend about five or six years, graduate and not have anything to do. I am very passionate about unemployment. When I did The Interview series, I was employed but I just wanted young Nigerians to be able to cope during job interviews because in reality, young people actually freak out during job interviews as well as visa application interviews. I just did the skits for people to know that they should be relaxed during these interviews.”