Home News Feed Two Men Jailed For Stealing Chicken
Facebook
Twitter
WhatsApp
Two men in the Nasarawa area of the country have landed in hot soup after being found guilty of stealing chickens from a poultry farm. 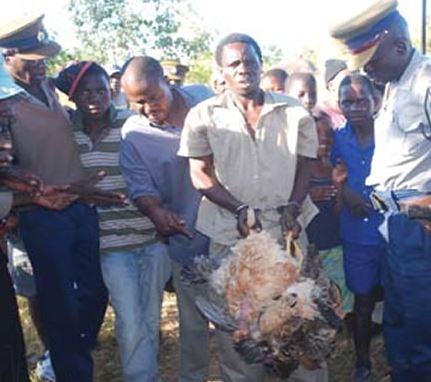 Two chicken thieves — Obadiah Agya and Barnabas Boqnet — are to spend the next 12 months behind bars, an Upper Area Court sitting in Masaka, Nasarawa State, ruled on Friday.
Both Agya, 25, and Boqnet, 34, (poultry hands) were given a sentence of six months each for stealing 20 chickens, belonging to their employers.
They pleaded guilty to the charges of criminal conspiracy and theft and urged the court to temper justice with mercy in sentencing them.
The Area court judge, Mr Yakubu Ishaku, sentenced the duo to six months imprisonment each for admitting guilt. Ishaku, however, gave the convicts an option of N10,000 fine and ordered them to pay N30,000 to the complainant and N10,000 for expenses incurred during the prosecution of the case.
He said the money should be paid within two months or else the convicts would spend additional one month in prison. Agya and Boqnet were arraigned in court alongside another accused, Joseph Iwa of the same address, who denied the charges.
Iwa pleaded not guilty and was granted N35,000 bail with one surety in a like sum.
Earlier, Police Prosecutor Frank Swem told the court that Mr Sani Bako, an Assistant Manager at Aqunth Farms at Kuchikua, Nasarawa State, reported the case at the Divisional Police Headquarters, Masaka, on Aug. 19.
Swem alleged that the trio at 8.30 p.m. conspired and stole 20 chickens from the farm, out which five were recovered from them.
The offences contravened Sections 97 and 287 of the Penal Code.
The trial of the third accused on bail has been adjourned until Sept. 20.