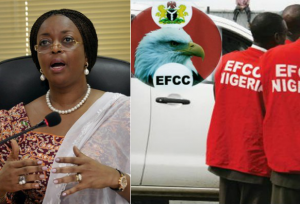 An attempt by former Petroleum Minister, Diezani Alison-Madueke, to return to Nigeria from London to face trial was succesfully blocked by the Economic and Financial Crimes Commission on Wednesday.

Mrs. Alison-Madueke had fled to London shortly after she left office in May 2015, and has stayed away from the country since then.

She later became an object of interest to the UK National Crime Agency which has since then being investigating her for corruption and money laundering. Already some assets linked to her in that country have been frozen.

Those familiar with the matter say she is barred from travelling out of the UK while the investigation lasts.

But it now appears the former minister is tired of staying in the UK, and now wants to return to Nigeria, where she is also being investigated for massive corruption.

As part of the plot, she recently filed an application before Justice Nnamdi Dimgba of the Federal High Court, Abuja, seeking to be joined as defendant in the trial of businessman Jide Omokore.

But counsel for Mrs. Alison-Madueke, Onyechi Ikpeazu (SAN), suddenly, on September 18, filed an application for his client to be joined as defendant, based on the fact that her name was mentioned in count eight of the charge.

He sought an amendment of the charge to include her as the seventh defendant, “in order to give her the opportunity to defend herself”.

In the said application, the former minister also requested the court to direct the Attorney General of the Federation to facilitate her appearance in court in Nigeria on the next adjourned date in October 2017.

That would have meant Nigeria requesting Britain to allow her travel out of the UK to attend the court hearing.

The EFCC however interpreted her action as a ploy to escape prosecution in the UK and frustrate the ongoing trial in Nigeria.

In mounting a strong challenge to the application, the counsel for the EFCC, M.S. Abubakar, in an 18-paragraph counter-affidavit, vehemently opposed the filing, arguing that, “the applicant realized she was being investigated, and she absconded abroad and sometimes in March this year operatives were in London, but her lawyers refused to allow the operatives interview her.

“My lord, this present application is a plot by the applicant to enable her escape prosecution in London, also to enable her come to Nigeria and scuttle the ongoing case which has already gotten to an advanced stage.”

After hearing arguments by both parties, Justice Dimgba declined to grant the application, and instead, struck out the eighth count in which the former minister’s name appeared.

The verdict effectively ended her dream of returning home after holing up in London for more than two years.

It remains unclear whether she would appeal the ruling.

The trial of Mr. Omokore and his co-defendants continues on October 5, the spokesperson for the EFCC, Wilson Uwujaren, said in a statement