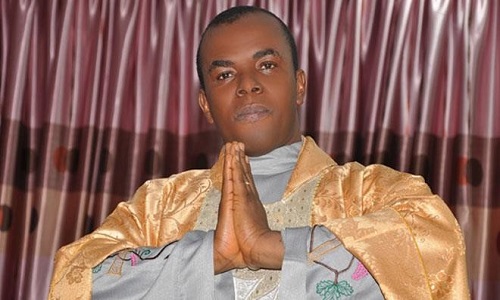 Catholic priest and Spiritual Director of Adoration Ministry, Enugu State, Rev. Fr. Ejike Mbaka, has according to reports, asked for the reimbursement of his N2million donation he made to the Rangers International FC of Enugu when they won the Nigeria Professional football last season.

The controversial priest is said to have been angered after the donation went to the wrong hands. He also blamed the club’s failure to retain the Nigeria Professional football trophy this season due to their fetish practice before matches, Vanguard report.

A source close to Mbaka said:

“He has given the dissolved management two weeks to give him back the money, so that he could share the money to the players himself.”

Last week, Governor of Enugu State, Ifeanyi Ugwuanyi fired the management and board of Rangers International FC of Enugu for failing to retain the Nigerian Professional Football League (NPFL) title.

At the just concluded NPFL, the Enugu Rangers who won the 2015/2016 Nigerian Premier League trophy were only able to finish at the mid-table. Plateau United dethrone them as Nigerian champions after they defeated the former holders 2-0 at the Rwang Pam Stadium last two weeks.