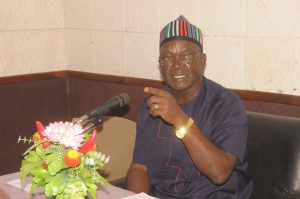 Benue state Governor, Samuel Ortom has appealed to civil servants who are currently on strike to understand that,  State’s financial constraints have made it difficult for it to meet their demands.

The State’s civil servants embarked on the indefinite strike on Tuesday, after going several months without pay.

The Nigerian Labour Congress, NLC, and Trade Union Congress, TUC, have engaged the Ortom administration in a series of negotiations spanning months, but the talks yielded a little result, according to the union officials.

The workers, some of whom were said to have endured up to nine months without pay, accused the governor of breaking his campaign promise to prioritise their welfare, a claim the governor countered.

“We have spoken with them but they have not been fair to me because they’re always carried along about the financial situation of the state and what is shared by the government,” Mr Ortom told PREMIUM TIMES in an interview at his official residence Thursday.

“Even though I want all workers to be paid for their hard work when you don’t have what would you do?” he added.

The governor denied claims that he squandered his state’s share of the Paris Club refund, stating that 80 per cent of the windfall actually went into settling workers’ salaries.

“Eighty per cent was used for workers’ salaries,” he said of the N6.4 billion his state received from the Paris Club reimbursement in July.

Mr. Ortom said he had been grappling with massive debt he inherited from his predecessors, in a state that ranks low in internally-generated revenue.

“I have salary arrears, gratuity and pension liability of over N40 billion,” he said. “So the N6.4 billion is a drop in the ocean.”

He said prior to the industrial action, the state had resolved to pay workers bi-monthly rather than monthly while implementing a minimum wage of N18,000 per month for teachers.

“What we do is we pay one-month full salary every two months. I met a wage bill of N8.2 billion without implementation of teachers’ minimum wage, which I did,” he said.

“My IGR (internally generated revenue) is N250 million on average and I get a little over N3 billion from the federal government.

“We have other challenges like security and (the) government must run,” he added.

The governor said sharp practices in personnel payroll have also contributed adversely to the state’s financial crisis but said new measures were being put in place to expel ghost workers.

“Modified table payments will help us after eliminating ghost workers and we’ll be able to pay workers who are working as and when due.”