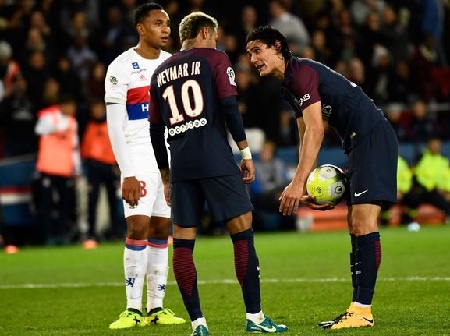 The on-field arguments that erupted between Paris Saint-Germain forwards Edinson Cavani and Neymar on Sunday reportedly carried on behind closed doors in the dressing room and threatened to get violent before a teammate intervened.
Cavani, who scored 49 goals last season, and Neymar, the world’s most expensive player at €222m, were in disagreement on two occasions during the game against Lyon with regard to which of them should take a free-kick and a penalty.
It was Cavani who won the dispute over the penalty, only to subsequently fail to convert.
According to L’Equipe, the Uruguayan informed his new teammate in the dressing room afterwards that he did not like his attitude. Neymar’s response to this is said to have been one of exasperation and it was down to club captain Thiago Silva to prevent a physical confrontation.
AdvertisementClick Here To Join The 10,000 Naira Giveaway For 100 People!