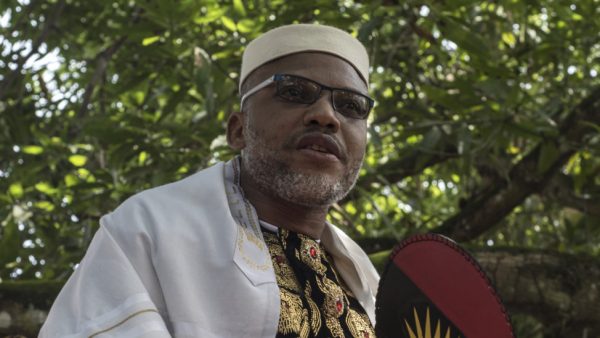 Leader of the Indigenous People of Biafra was absent as three of his co-defendants facing charges of treasonable felony arrived the Federal High Court in Abuja today.

According to Punch, they were brought to court by prison officials at about 10am on Tuesday. Kanu has been missing since September 14, 2017 following a military operation in his hometown in Abia State.

Justice Binta Nyako is now set to commence proceedings without him.

His co-accused already in court are the National Coordinator of IPOB, Mr. Chidiebere Onwudiwe; an IPOB member, Benjamin Madubugwu; and a former Field Maintenance Engineer seconded to the MTN, David Nwawuisi.

But Bright Chimezie, who became a co-defendant in the case following an amendment of the charges was also absent. Kanu was on bail before he was declared missing.

Announcing his appearance on Tuesday, Kanu’s lawyer, Mr. Ifeanyi Ejifor, told the judge that the IPOB leader was still in the custody of the Federal Government.