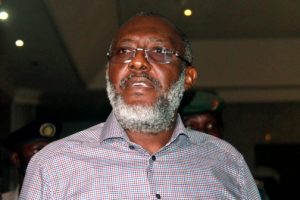 The defence in the ongoing trial of a former National Publicity Secretary of the Peoples Democratic Party, Olisa Metuh, on Tuesday urged the Federal High Court in Abuja to order the arrest of the Director-General of the Department of State Service, Mr. Lawal Daura, for failing to produce the detained former National Security Adviser, Sambo Dasuki, in court.

Justice Okon Abang had on October 25 directed Dasuki and former President Goodluck Jonathan to appear in court on Tuesday in respect of the trial of Metuh.

The court had earlier issued separate subpoenas on Dasuki and Jonathan upon Metuh’s application.

But while as of October 25, Jonathan had yet to be served with the witness summon, Dasuki had been served through the Director-General of the DSS.

The judge had also issued another subpoena on the DG of DSS to produce Dasuki in court on Tuesday.

While Dauski was not produced in court on Tuesday, Jonathan’s lawyer, Chief Mike Ozekhome (SAN), appeared in court to challenge the subpoena issued on the former President.

Ozekhome noted that ‎Jonathan had yet to be served but only read about the subpoena in the newspapers.

A court registrar confirmed, upon an enquiry by the judge on Tuesday, that the court bailiff had not been able to serve the former President, who was said to be outside the country.

But Ozekhome, after he was granted permission to speak on the Dasuki issue, despite the objection of prosecuting and defence lawyers on record in the case, supported the call for Daura’s arrest, contending that the failure of the DSS to produce the ex-NSA in court on Tuesday amounted to taking the court for a ride.

Justice Abang had on October 25 given the court bailiff five days to effect personal service of the subpoena on Jonathan and also directed the prosecuting counsel, Mr. Sylvanus Tahir, to persuade the management of the Economic and Financial Crimes Commission to liaise with the DSS to produce Dasuki in court on Tuesday (today).

But when asked by the court about the situation of things, Tahir narrated the anti-graft agency’s efforts in complying with the court order directing the EFCC to liaise with the DSS.

Tahir added that he had taken further step to speak with the Legal Adviser of DSS.

Tahir said the DSS’ Legal Adviser informed him that Dasuki refused to be brought to court on the advice of his (Dasuki’s) counsel.

He said, “In addition to that, I personally liaised with the Legal Adviser of the DSS on the need for the organisation to comply with the court order.

“Up till this morning, exactly a quarter after 7 am, the said Legal Adviser informed me that they were ready and willing to bring the intended witness to court, but that the subpoenaed witness said, on the advice of his legal team, he has been advised not to come to court.

“I advised the Legal Adviser, that in the circumstances the DSS found itself, they should personally come to court this morning to explain their situation to the honourable court. Our own role to facilitate by liaising with the DSS, so we have played our part.”

In response, Metuh’s lawyer, Mr. Emeka Etiaba (SAN), urged the court to disregard Tahir’s submission as it was not admissible because it amounted to hearsay and was not backed by an affidavit stating the facts.

While also arguing that Tahir’s submission was inadmissible, Ongbufor maintained that it was inconceivable that Dasuki could be more powerful than the DSS that was detaining him to the extent that he could stop the agency from producing him in court.

He argued that the DSS’ conduct by failing to produce Dasuki in court was an act of disrespect for the court.

He thereby urged the court‎ “to apply the consequences provided by the law.”

“I do not think it lies in the mouth of DSS that he (Dasuki) refused to comply with the order of the court.‎”

He asked the court to apply the provisions of section 244 of the Administration of Criminal Justice Act by ordering Lawal’s arrest.

He said, “This is more contemptuous that the DSS fails to appear before the court to explain the situations in their environment.

“My lord this is unacceptable.

“If they have an atom of respect for the court, they would appear before your lordship this morning and I refer your lordship to section 244 of ACJA.

“Your lordship has the power to issue an arrest warrant against DSS,” adding that “your lordship will now issue a warrant of arrest against the Director-General of DSS in person”.

When asked if the court could order Lawal’s arrest when the name of the DSS’ DG was not specifically mentioned in the order directing that Dauki be produced in court, Onwugbufor said, “I agree that his name is not mentioned but it has legal consequences and connotation.

“This is because a human being is occupying the office of the DG of DSS. It would have been different if the subpoena was issued to Department of State Service. But this is different, the order was issued against the occupant of the office, to appear before your lordship and explain to your lordship his failure to produce Dasuki in court to show how a detainee will be more powerful than the person detaining, which is an absurdity.

“It is my submission that they are playing hanky-panky with this court. They are passing the buck and the buck must stop somewhere.

“It will stop when your lordship issues a warrant of arrest against the Director-General of DSS.”

In his contribution, Dasuki’s lawyer, Mr. Ahmed Raji (SAN), described Tahir’s submission as “damning and incriminating hearsay” which should be expunged from the court’s record.

Raji also urged the court to hear his motion seeking the execution of proceedings relating to the summon issued on his client to appear in court based on the appeal and motion he had filed before the Court of Appeal seeking the setting aside of the motion.

Also, Jonathan’s lawyer, Chief Mike Ozekhome (SAN), also informed the court of his client’s motion seeking an order setting aside the subpoena issued on the ex-President.

Ozekhome requested as an alternative prayer that Metuh should be made to provide the sum of N1bn to cover for Jonathan’s and his security personnel travelling expenses from Otuoke in Bayelsa State, the ex-President’s hometown, to Abuja.

But he also supported the call for Daura’s arrest and called for indefinite adjournment of the trial pending when Dasuki’s motion would be determined by the Court of Appeal.

He said, “It is inconceivable that the DSS could not bring a person who has been in their custody for two years and who has not been proved to be violent. I think they are taking this court for a ride.

“The applicable section, therefore, is section 243 and 244 of ACJA.”
But in the course of the proceedings, the prosecuting counsel, Tahir, indicated that a representative of the DSS, Echika Owete, had appeared in court.

Tahir also read to the court a text message he got from the Legal Adviser stating that Dasuki said he would not come to court except by force.

According to the message, after much persuasion by DSS personnel, Dasuki agreed to appear in court at the next date.