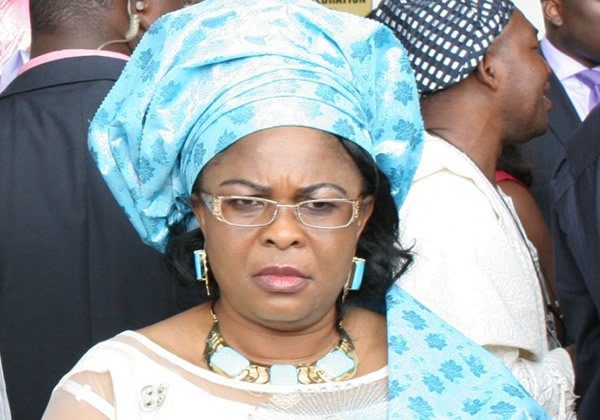 The Economic and Financial Crimes Commission, EFCC, has allegedly traced the sum of N2.114bn to the bank account of a company owned by the wife of former President, Patience Jonathan and her late mother, Mama Charity Oba, Magel Resort Limited.

The agency made the disclosure while alleging that the former First Lady perpetrated fraud using some non-governmental organisations, NGOs.

In its interim report, the anti-graft agency claimed that at least N17bn, including funds from some government agencies, were paid into the accounts of the former First Lady’s NGOs.

Disclosing that a total inflow of N2.4bn was allegedly recorded in the account between 2009 and 2015, the commission alleged that some of the NGOs had the names of former First Lady’s domestic servants as directors.

The report says “Another company owned by Mrs Jonathan is Magel Resort Ltd. It was incorporated by Mrs. Jonathan’s late mother. But Patience Jonathan became the sole signatory to the account of the company by board resolution upon the demise of her mother.

“Though registered as a resort agency, sources at the EFCC disclosed that the agency was probing the circumstances in which the firm secured over N200m IT contract from the National Information Technology Development Agency.

“The contract was allegedly bankrolled through the National Information Technology Development Fund. Several other persons under investigation for money laundering by the anti-graft agency were discovered to have made payments into the company’s account including a hotelier in Central Area, Abuja, who has been invited for questioning.

“The total sum allegedly laundered through the account of Magel Resort Limited, owned by Mrs Jonathan and her late mother, is put at N2.114bn.

“Some of the domestic aides that made payments into the accounts are also trustees of her so-called NGO and director in her companies. The balance in the account was $12,831,173.

“Another discovery was the N2.1bn and N1.8bn deposited into the accounts of AM PM Global Network Limited and Pagmat Oil and Gas Limited respectively, between 2009 and 2015. Both companies are linked to the former First Lady.

“Another N1.140bn was also allegedly laundered by Mrs. Jonathan through the account of Lawari Furniture and Baths Limited, whose address is given as 100 Akamfa Road, Yenagoa, Bayelsa State.

“The bulk of the money was deposited by Bureau de Change operators.”

Share
Facebook
Twitter
WhatsApp
Previous articleCourt fixes November 6, for the hearing of Olubadan and Ajumboi
Next articleHuddah Monroe reveals the two types of men chasing her
- Advertisement -Ad ==> Discover how a young Nigerian graduate now makes a consistent 40k per week doing a legitimate online business. You too can start yours now, click here!!!