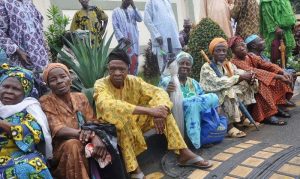 Pensioners in Abia State have lamented the inability of the state government to pay them over 20 months pension arrears and 18 years gratuities.

The pensioners, who were clad in black attire, marched through Aba Road to the Government House in Umuahia, the state capital, on Wednesday to protest against what they described as government insensitivity to the suffering of their members.

The Chairman of the Abia State Civil/Public Pensioners Association, Dr Emmanuel Okparanta, said members of the group were owed many months of pension arrears, contrary to the government’s claim of settling the arrears.

He said, “Since the beginning of the year, only one month pension has been paid to them; even that of February, only a few received bank alerts. It is regrettable that promises made by the state government to offset the backlog of arrears were not fulfilled. Our members are currently passing through unbearable hardship. Pensioners are dying on a daily basis as a result of delayed payment of pensions and gratuities.”

The state Governor, Okezie Ikpeazu, who was represented by his Principal Secretary, Chief Emma Nwabuko, said the government was committed to clearing all backlog of pensions.