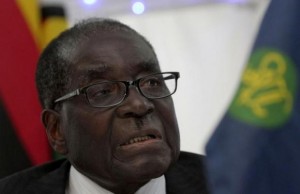 The head of the African Union said on Thursday that the body “will never accept the military coup d’etat” in Zimbabwe.

“We demand respect for the constitution, a return to the constitutional order and we will never accept the military coup d’etat,” Alpha Conde said in an interview with French journalists in Paris.

“We know there are internal problems. They need to be resolved politically by the ZANU-PF party and not with an intervention by the army,” added Conde, who is also Guinea’s president.