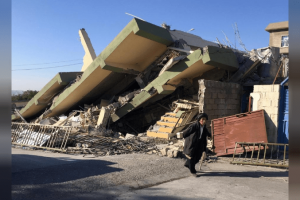 At least 120 people were killed in Iran and at least several others in Iraq when a powerful magnitude 7.3 earthquake hit the region, state media said, as rescuers stepped up efforts overnight to find dozens trapped under rubbles.

At least 129 people were killed in Iran’s Kermanshah province on the Iraqi border, the provincial deputy governor told state television.

“There are still people under the rubbles. We hope the number of dead and injured won’t rise too much, but it will rise,” Mojtaba Nikkerdar said.

Kurdish health officials also said at least four people were killed in Iraq and there were 50 injured.

The U.S. Geological Survey said the quake measured magnitude 7.3, while an Iraqi meteorology official put its magnitude at 6.5 with the epicentre in Penjwin in Sulaimaniyah province in the Kurdistan region close to the main border crossing with Iran.

Electricity was cut off in several Iranian and Iraqi cities, and fears of aftershocks sent thousands of people in both countries out onto the streets and parks in cold weather.

“The night has made it difficult for helicopters to fly to the affected areas and some roads are also cut off… we are worried about remote villages,” Iranian Interior Minister, Abdolreza Fazli, said in an interview.

Many houses in rural parts of the province are made of mud bricks and are known to crumble easily in quake-prone Iran.

A quake registering a magnitude between 7 and 7.9 can inflict widespread, heavy damage.

Local people said in media reports sent on Twitter that they had felt several aftershocks.

Local Television said schools were closed in Kermanshah and Ilam provinces on Monday.

Residents of Turkey’s south-eastern city of Diyarbakir also reported feeling a strong tremor, but there were no immediate reports of damage or casualties in the city.

“We are coordinating with Iranian and Iraqi Red Crescent groups. We are also getting prepared to make deliveries from our northern Iraq Erbil depot,” he said.

Israeli media said the quake was felt in many parts of Israel too.