Home Sports ‘Even Lionel Messi May Not Have Saved Us From Nigeria’- Argentina Coach...
Facebook
Twitter
WhatsApp 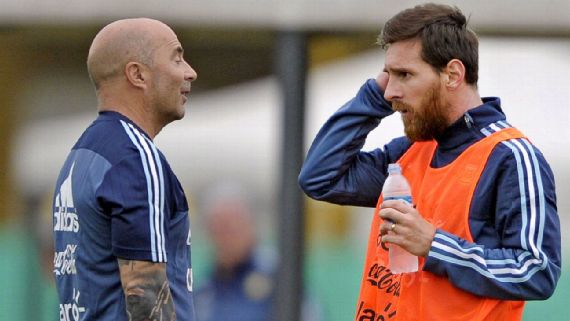 Head coach of the Argentina national team, Jorge Sampaoli, has played down suggestions that they would have beaten Nigeria, if Lionel Messi was in the team.

Messi returned to Barcelona after their 1-0 win over Russia last Saturday and missed their 4-2 loss to the Super Eagles in a friendly on Tuesday night.

Speaking after the game Sampaoli refused suggestions that if Messi had played they would have won, insisting that the players he had on the pitch should have done better.

“We (Argentina) have to move away from being a one man team. Maybe the scoreline would have been different with Messi on the pitch, but it’s hard to say because we had enough quality in the team to win any game.

“Nigeria were way better in the second half, they never stopped running and that made it hard for us to find any sort of rhythm going forward which they took advantage of to win. They did well to win,” Sampaoli said.