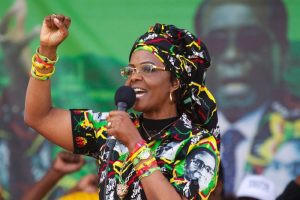 Students at the University of Zimbabwe skipped their semester final exams on Monday, demanding that vice-chancellor Levi Nyagura revoke the PhD controversially awarded to now ex-First Lady Grace Mugabe in 2014, or that he step down with immediate effect.

The students also said they would not write exams unless President Robert Mugabe leaves office.

UniZim was forced to stop the exams after the students vowed they would not step into exam halls unless their issues had been addressed.

Grace’s thesis has never been made public and, according to university records, she graduated three months after registration for a programme which usually takes three years to complete.

Her husband is the chancellor of all 10 state universities.

Despite being under house arrest, Mugabe presided over the Zimbabwe Open University graduation ceremony in Hatcliffe, Harare, on Friday.

Meanwhile, Zimbabwe National Students Union secretary-general, Makomborero Haruzivishe, said on Monday afternoon they had declared a state of emergency at all tertiary institutions following the military’s intervention in the running of the country’s affairs.

“There is confusion now everywhere,” he said.
Source : ( iol.co.za)