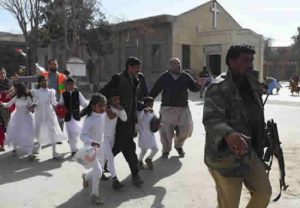 A suicide bomb attack on a Pakistan church claimed by the Islamic State group killed at least eight people and wounded 30 during a service on Sunday, just over a week before Christmas.

Two women were among the dead at a Methodist church in the restive southwestern city of Quetta in Balochistan province, said provincial Home Secretary Akbar Harifal.

Several of the wounded were in serious condition, police added.

Officials said police intercepted and shot dead one attacker outside the church before he could detonate his bomb. But the second managed to reach the church’s main door, where he blew himself up.

“Police were quick to react and stop the attackers from entering into the main hall,” provincial police chief Moazzam Jah told AFP.

IS, in a brief statement on its Amaq news agency, claimed responsibility.

Balochistan provincial home minister Sarfraz Bugti said around 250 people normally attend the church on Sundays, but the congregation had swelled to around 400 because it was close to Christmas.

“God forbid, if the terrorists had succeeded in their plans more than 400 precious lives would have been at stake,” tweeted the home minister.

An AFP reporter at the scene saw shattered pews, shoes and broken musical instruments littered across the blood-smeared floor of the church.