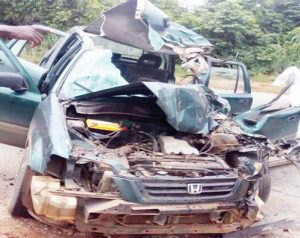 Two persons were also said to have sustained varying degrees of injury in the accident, which occurred at 1:35pm on Friday, barely 48 hours to the New Year.

It was learnt that the victims were en route to Benin when their bus, a Toyota Hiace, collided with a Dangote truck on the Asaba-Benin Expressway.

The spokesman for the state Sector Commander of the Federal Road Safety Corps, Mr. George Otoaviokhai, confirmed the accident on Saturday.

He explained that while two male adults survived the crash, four unknown passengers could not be found.

He, however, noted that the remains of the victims had been deposited in a mortuary.