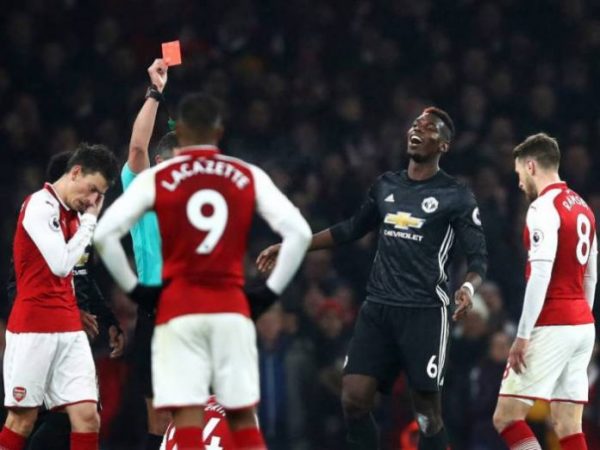 Paul Pogba will miss the Manchester derby after receiving a straight red card against Arsenal on Saturday.

The Frenchman was dismissed for a dangerous tackle on Hector Bellerin with United leading 3-1 in the second half at the Emirates Stadium.

Pogba had been instrumental in establishing that lead, providing the assists for the Red Devils’ first and third goals and controlling the midfield.

But – barring an unlikely appeal – Jose Mourinho will now not be able to call upon Pogba when United host league leaders Manchester City in a crucial game next Sunday.

He will also miss the following home game against Bournemouth and a visit to West Brom as he serves a three-match ban before returning to contention for the Carabao Cup quarter-final against Bristol City on December 20.

Pogba could be back in the United lineup on Tuesday night before the ban kicks in, though, when they take on CSKA Moscow at Old Trafford in the Champions League.

The 24-year-old exchanged passes with Antonio Valencia as the right-back gave the visitors the lead in the fourth minute in north London.

Jesse Lingard doubled their advantage just seven minutes later, but Alexandre Lacazette pulled one back shortly after half-time as Arsenal piled on the pressure.

Pogba soon saw that United’s two-goal lead was restored, though, by brilliantly shaking off Laurent Koscielny to cross for Lingard, who tapped in his second.

Andre Marriner, the referee, then dismissed Pogba for a lunge that connected with Bellerin’s leg in the 74th minute.

It was the former Juventus man’s first red card since he was given his marching orders while playing for the Bianconeri against Palermo in May 2013, and only the second of his senior career.

United held out with 10 men to secure three points and pull within five points of City, who have a game in hand.