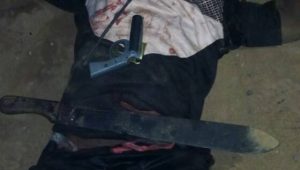 A runaway armed robber was shot dead at his in-laws’ house on Christmas Day‎, he sometime ago led the gang, which shot and wounded the Divisional Police Officer of Ogbere, Adeyinka Akingbade, during an encounter with police at an hotel in Ijebu-Ife town of Ogun State.

The suspect managed to escape and thereafter temporarily relocated to Delta State, while two of his cohorts were arrested.

The Ogun State Police Command Public Relations Officer, Abimbola Oyeyemi, who confirmed the development said‎ the suspect had been on a wanted criminals’ list and the command ha been on his trail since then.

”The escaped member of armed robbery gang who shot and injured the former DPO, Ogbere, Mr. Adeyinka Akingbade has been shot dead during an encounter with police operatives at Ijebu ife on the 25th of December 2017,” he said.

Mr. Oyeyemi added that the suspect who escaped arrest and fled to Delta state met his waterloo on Christmas day when police operatives received an information that he was sighted in a beer parlour at Itawade area of Ijebu ife.

“Upon the information, the policemen swiftly moved to the place, but before getting there, he had left the place. He was however traced to his in-law house where the police operatives caught up with him,” he said.

The command’s spokesman said, having realised that the game is up, the suspect brought out a pistol and started firing at the policemen.

He said the operatives were left with no other alternative than to fire back after which he was shot dead.

“Recovered from him are a locally made pistol, a matchete, assorted charms and a Toyota Highlander with two different registration numbers.”