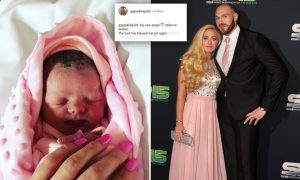 Controversial British boxer Tyson Fury has welcomed his fourth child with his wife, the
child identified as Valencia Amber, was born on Monday morning and the excited Fury took to social media to announce the new bundle of joy.

He wrote via Twitter: ‘My little angel born this morning Valencia Amber, thank god & @parisfury1 for this blessing.’

Fury, 29, also shared a sweet snap of his daughter on Instagram with the heart-warming caption:

‘My new angel Valencia Amber, the Lord has blessed me once again.’

Fury and wife Paris have been together since they were teenagers and are parents to three other children namely Prince John James, Venezuela and Prince Tyson Fury II.

He has been inactive for the better part of two years since dethroning Wladimir Klitschko as an heavyweight champion in Dusseldorf back in November 2015.

Tyson Fury is hoping to get back into the boxing ring as he is presently fighting against the revoking of his boxing license.