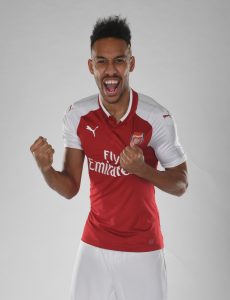 The move was a record-breaking one as the Gunners reportedly splashed 56 million pounds (79.2 million dollars, 63.7 million euros) to land the Gabonese striker from Bundesliga outfit, Borussia Dortmund.

Already, both clubs have confirmed the move.

The 28-year-old Gabon striker, who has scored 141 goals for Dortmund since joining in 2013, signed a long-term contract with the London club.

Aubameyang’s arrival is likely to lead to the departure of veteran marksman Olivier Giroud.

“Pierre-Emerick Aubameyang has joined us from Borussia Dortmund on a long-term contract for a club-record fee,” the statement from Arsenal said.

The club described him as “one of the world’s most highly-rated strikers”.

“He scored 98 goals in 144 Bundesliga games for Dortmund and had a hand in 172 goals in 213 matches in all competitions for his former club,” it continued.

“That works out at an average of 96 minutes per goal or assist.

“Auba is the Gabon captain and all-time top goalscorer, and became the first Gabonese winner of the African Footballer of the Year award in 2015.”