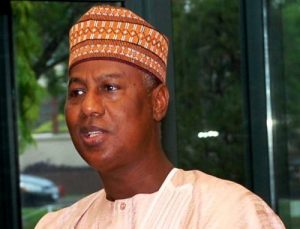 The News Agency of Nigeria (NAN) reports that the two-term former governor and his deputy who served under the PDP had recently declared support for the APC).

The state APC Chairman, Attahiru Maccido, formerly received the decampees and many others at a symbolic ceremony in Birnin Kebbi on Saturday.

He said the defectors did not give any condition for their decision to join the APC fold in the state.

“According to them, they defected as a result of leadership style of President Muhammadu Buhari and Gov. Atiku Bagudu, especially in the areas of security, agriculture and economic sectors,” he said.

He assured the decampees that they would be accorded equal opportunity and/ or privileges in the party, adding that “the doors of the party are still open for others to join.”

Speaking on behalf of the defectors, former Gov. Dakingari said the defection was a result of deep thoughts in the past three years since he left power.

“No body had heard my voice on political issues for three years and I joined the APC not for gain but for the efforts President Muhammadu Buhari and Atiku Bagudu have been doing at the federal and state levels respectively for progress,peace and unity.

“I call on all those I have offended to forgive me and I forgive those who offended me too,” he said.

In his remarks, Gov. Bagudu expressed optimism that the state would continue to move forward with the coming of new members into the party.

“Our state is blessed with mineral resources but improper coordination had been the stumbling block toward exploitation of the resources.

“With the cooperation we have now, we will achieve greatness If we are truly committed to our aims and objectives of moving our state to greater heights,” he said.

He said the successes recorded by Gov. Bagudu was monumental that made the people to join the party.