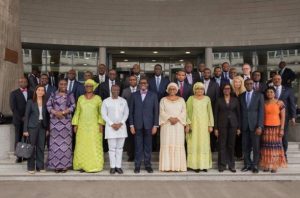 Nigeria’s Minister of Finance, Mrs. Kemi Adeosun, has been appointed into the Investments Committee of the United Nations Joint Staff Pension Fund (UNJSPF).

The Under-Secretary-General of United Nations, Jan Beagle, who confirmed Adeosun’s appointment, disclosed that the Minister would serve a one-year term of office effective from January 1, 2018.

Beagle said, “On behalf of the Secretary-General, I have the honour to inform you that at the 55th plenary meeting of the seventy-second session of the General Assembly, the General Assembly decided to appoint you as an ad-hoc member of the Investments Committee for a one-year term of office, beginning from 1st January, 2018.

“I would like to take this opportunity to congratulate you on your appointment and wish you success in your work.”

The Representative of the UN Secretary-General on the Investments Committee of the UNJSPF, Ms. Carolyn Boykin, also congratulated the Minister on her appointment and welcomed her to the Committee.

Boykin explained that the purpose of the investments of the UNJSPF was to secure the pension entitlements of the international civil servants who participate in the Fund.

“The fiduciary responsibility is to all parties concerned and it is the responsibility of the Secretary-General to ensure that those investments are managed to preserve the capital of the Fund and to obtain a long-term real rate of investment return that is line with the actuarial assumptions, without jeopardizing the capital of the Fund by taking excessive risks,” Boykin stated.

The UNJSPF is a Fund that provides UN pension, death, disability and the other related benefits for staff of the United Nations and the other organizations admitted to membership in the Fund.

The UNJSPF is a multiple employer defined benefit plan and governed by the United Nations Joint Staff Pension Board (UNJSPB), the Staff Pension Committee for each member organization, and a secretariat to the UNJSPB and to each such committee.

The Fund was established through UN General Assembly resolution 248 (III) (passed December 1948) which came into effect on the 23rd January, 1949 making it a permanent retirement scheme.