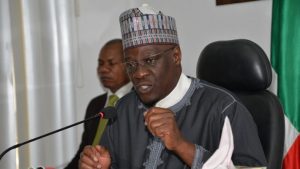 Governor of Kwara State , Abdulfatah Ahmed, has frowned against the midnight attack on worshippers on the eve of the New Year on Ibrahim Taiwo Road in Ilorin.

The News Agency of Nigeria reports that some churches on lbrahim Taiwo Road were attacked by some yet-to-be identified persons in the early hours of Monday during the New Year service.

The governor, in a statement signed by his Chief Press Secretary, Abdulwahab Oba, described the dastardly attack as criminal, satanic and alien to the state.

Mr. Ahmed, however, commended those who made efforts to protect some of the victims regardless of their religious inclination.

He therefore called on security agencies to immediately launch an investigation into the incident and unravel the perpetrators of the unholy act with a view to bringing them to book.

“Peace is sine qua non for the development of any society and the government will not tolerate any act capable of breaching peace, unity and tranquility of the state,” he said.

The governor called on the people of the state to imbibe spirit of tolerance and harmonious relationship for sustenance growth and economic development in the state.

Mr. Ahmed also called on parents and guardians to monitor their children and wards with a view to curtailing their likely excesses.

The Speaker of Kwara House of Assembly, Ali Ahmad, has also condemned the attacks.

The Speaker, in a statement jointly signed by his Special Assistant (Media), Shuaib Abdulkadir, and the Chief Press Secretary to the State House of Assembly, AbdulRahman Sanni, expressed disgust over the attacks.

Mr. Ahmad, however, called for calm, adding that the attack was not religiously motivated, but believed to have been carried out by some hoodlums.

“They must be brought to book to serve as deterrent to others.

“Peace is the pivot of socio-economic transformation of any society and one of the indices of development,” he said.

He commended the Police Commissioner, Ado Lawan, for police prompt intervention which brought the situation under control.

The speaker called for investigation into the incident with a view to apprehending those behind the attacks on the innocent worshippers.

He urged the State Attorney-General and Commissioner for Justice, Kamaldeen Ajibade, to ensure that those arrested were prosecuted.