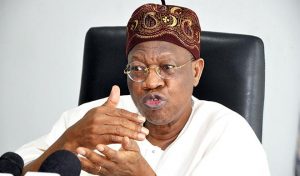 The Federal Government has appealed to the media and public commentators to exercise utmost restraint in their coverage of the fallouts of the recent farmers/herders’ clash in Benue.

The Minister of Information, Lai Mohammed, who made the appeal in a statement in Abuja on Saturday, cautioned against “incendiary comments, unrestrained use of pictures and footages that offend human sensibilities” in the coverage of the crisis.

The Minister also cautioned against “finger pointing” that could exacerbate the situation and complicate ongoing efforts by the Federal Government to end the crisis.

He said the media and commentators should be cautious of their coverage in order not to further inflame passion and worsen the situation.

Mr. Mohammed said the government is working hard to address the situation with a view to preventing a recurrence, not just in Benue State but everywhere across the country.

“Lest we are misunderstood, we are neither saying the media should not cover the crisis nor asking public commentators to desist from commenting on it.

“All we are saying is that both must be circumspect.

“The current poisoned atmosphere of incendiary comments, unrestrained use of pictures and footages that offend human sensibilities as well as finger pointing can only exacerbate the situation and complicate ongoing efforts to end the crisis,” he said.

The Minister said the government was saddened by the loss of lives and the destruction of property resulting from the crisis.

He said that President Muhammadu Buhari, in commiserating with the Benue Governor, unreservedly condemned the killings.

He said the president had also assured of the necessary security measures to prevent further attacks and bring the perpetrators to book.

Mr. Mohammed said the government had mapped out short and long-term solutions to the incessant clashes, including a planned conference of stakeholders.

He assured of the government’s strong determination to find a lasting solution to the farmers/herders’ clashes.