Controversial media personality Kemi Olunloyo appears to be back to her ‘old ways’ judging by her latest comments.

Kemi Olunloyo who was just released from prison for the third time declared on Twitter that there was nothing special in Nollywood actress Funke Akindele playing a role in a Hollywood movie.

Recall that news broke recently of the talented actress, Funke Akindele playing a role in the next installment in the Avengers Franchise. 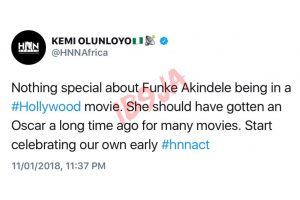