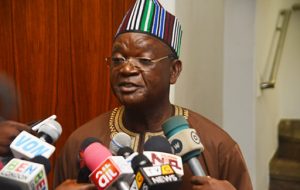 Benue State Governor , Mr. Samuel Ortom, has blamed the Federal Government for the killing and destructions by herdsmen in the state.

Ortom, at a meeting with the Senate Ad Hoc Committee on Security, which is in the state on a fact-finding mission on the attacks, accused President Muhammadu Buhari, Vice-President Yemi Osinbajo; the National Security Adviser, Maj.-Gen. Babagana Monguno (retd.); and the Inspector-General of Police, Mr. Ibrahim Idris, of ignoring several warnings of the impending attack on communities in Benue.

The governor also blamed security agencies for the continued killings of people in the state by herdsmen since 2008.

Ortom told the lawmakers that upon getting information of the planned attacks, he immediately wrote a letter to Osinbajo, who was the Acting President, while Buhari was on medical vacation in London.

According to the governor, all attempts to get the vice-president’s attention through the letter failed as he got no reply from Osinbajo.

Ortom said he also wrote letters to Buhari after his return to Nigeria but got no response from him.

He said out of desperation, the Benue State Government went further to draw the attention of Monguno in a separate letter addressed to the NSA, but still got no communication from him.

Ortom said, “We wrote to the vice-president on the planned attacks on parts of Benue by Fulani herdsmen, because the threat was everywhere on the streets, but he refused to reply.

“However, when Mr. President returned from the United Kingdom, I intimated him through a letter. The documents are here.

“I wrote to him on the planned attack by Fulani herdsmen because the threats were on the streets.

“On October 7, 2017, I wrote to the Inspector-General of Police; I told him of a planned attack on our people when there was no response (from the Presidency).

“On October 27, 2017, I reminded him that these people were planning to attack us, that we are law-abiding, we have disarmed our youths and we are looking unto security agencies, and that the way to do it was to arrest those people who were inciting the herdsmen to combat us, and we knew they were going to come.”

He added, “I also wrote the Senate President (Bukola Saraki), and the Speaker (House of Representatives, Yakubu Dogara) on October 7. I also wrote the National Security Adviser and the Director-General of the Department of State Services to intimate them on the planned attacks. When there was no action, I followed it up with a reminder on October 27, 2017.

There was no response from any of them. In fact, the National Security Adviser invited us to a meeting two times but it was put off.

“This is very sad. I know those people who are responsible for the killings. I accused them and I have evidences against them.

“If I had bought guns and gave to my people, would they have been killed in the manner they were killed? I disarmed my people. I’ve not bought a single gun, I’m a Christian. If I bought, I would say so.”

Ortom also faulted the Governor of Plateau State, Solomon Lalong, for claiming that he (Lalong) warned him (Ortom) against introducing the anti-grazing law in Benue.

He said, “How can he warn me? Am I the Governor of Plateau State or am I his member of staff? Do I work for him? I’m Governor of Benue State, and my responsibility is to do what my people want. That is what democracy is.”

Chairman of the Senate Ad Hoc Committee, Senator Ahmad Lawan, said the panel was set up to ensure a review of security infrastructure of the country.