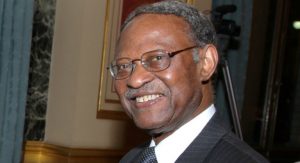 The former Secretary General of the Commonwealth, Emeka Anyaoku, was congratulated by President Muhammadu Buhari on his 85th birthday on January 18, 2018 was

The President also congratulated all the professional colleagues, family members and friends of the “highly resourceful diplomat and elder statesman whose resume on international diplomacy and community development continues to inspire and instruct on the power of discipline, focus and knowledge”.

The statement released Tuesday by presidential spokesperson, Femi Adesina, said, ”
As the first and so far the only African Secretary General of the Commonwealth, the President affirms that Chief Anyaoku contributed seminally to Nigeria’s return to democracy in 1999, combining his thorough understanding of the peculiarities of the political structures, with his office and international network of friends to garner support for the country’s transition.

“President Buhari extols Chief Anyaoku’s unwavering patriotism and commitment to the unity and progress of Nigeria as he continues to contribute to national affairs, through formal and informal advice to Presidents, including chairing the meeting that led to the adoption of the Abuja Accord, by which all the presidential candidates in 2015 committed themselves and their political parties to non-violent campaigns and acceptance of the results in good faith.

“President Buhari prays that the almighty God will grant Mr. Anyaoku, who is the Ichie Adazie of Obosi, longer life and more fruitful years to serve his country.”