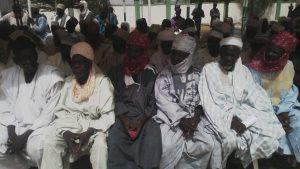 The Jigawa State Police Command, held a security summit for farmers and herdsmen in a bid to find solutions to the security challenges in the region.

The summit provided a platform for deliberation to seek solutions to the escalating herdsmen and farmers clashes faces in the state and North-east zone.

The gathering which took place on Wednesday at Kirikasamma local council headquarters, was presided over by the state police commissioner, Bala Senchi.

Mr. Bala at the event said the attendance was an indication that the people were ready to cooperate to end the carnage.

Ibrahim Hassan Hadejia, the state deputy governor said Jigawa witnessed a high prevalence of farmers and pastoral conflict especially in the North-eastern part of the state.

Mr. Hassan further warned both parties not to take laws into their hands.

“The state will soon retrieve all reserved areas that are meant for grazing and allocate it back to its original purpose,” he said adding that the state had provided 81 wind-mill pumps to the various grazing land across the state.

Mr. Hadejia was represented by the executive secretary, Farmers and Herdsmen Board, Rabiu Miko.

Meanwhile, Wada Maija’a, Chairman, Miyatti Allah, Kirikasamma local government said the most affected area of crises in the locality is Zagari village to Tina’u area. He said there is no clear demarcation for grazing and farming hence the crisis.

Also the Chairman All farmers Association of Nigerian (AFAN) in Kafin Hausa local government, Abba Umar decried the fact that some politicians had turned grazing land into their personal farmland. He called on the government to, ”nullify the bad habit of grazing at night and using of masks by some herdsmen in the area.”