Gov. Ortom at the senate panel

The Benue State Governor, Samuel Ortom, is currently before the Senate Panel Investigating the killings in the state, according to Channels TV.

The Committee had on Tuesday last week, presented a report of its investigation into the failure of the Inspector General of Police (IGP) to arrest and prosecute the perpetrators of the January killings in Benue State.

In that report, the committee stated that the IG informed them of the arrest of 145 people. 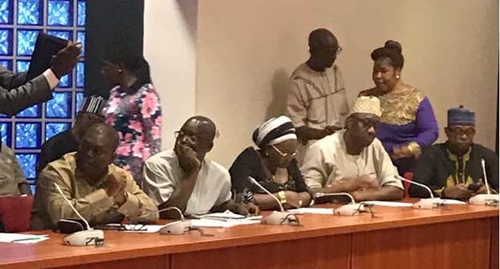 However, the Senate rejected the report of the committee for failing to get the views of the Benue State governor on the security issues in the state.

The report was presented by the Chairman of the committee, Senator Abu Ibrahim, for failing to speak with the Benue State governor, Samuel Ortom, to get his own side of the security issues in the state.

The Senate refused to consider the report, instructing the committee to speak with the state governor and report back in one week.