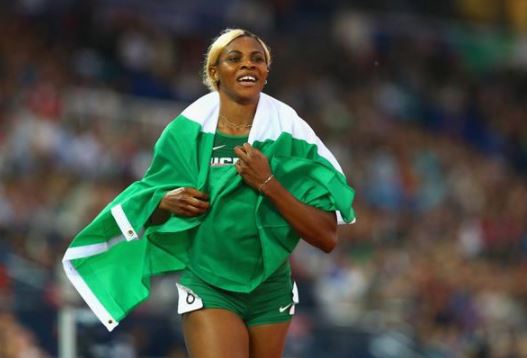 According to a report by Punch Metro, Blessing Okagbare on Saturday started her outdoor season with an impressive 22.04secs in her 200m race at the Wes Kittley Invitational Track and Field Meet at the Abilene Christian University, which erased the 22-year-old previous African record of 22.07secs set by Mary Onyali at a Meet in Switzerland in 1996.

Cierra White followed in second place in 23.26secs while Natasha McDonald settled for third in 24.23secs.

Apart from becoming the new African record, Okagbare’s winning time also becomes the new national record in the women’s 200m. Okagbare’s previous personal best in the event was 22.23secs was set at the 2014 Eugene Diamond League.

With her latest exploit, it means that Okagbare now holds the Nigerian records in the women’s 100m (10.79secs) and 200m. Okagbare did not compete in the indoor season, which started in January. The Wes Kittley Invitational was her first competition of the season.

The 26-year-old is one  of the 37 athletes listed by the Athletics Federation of Nigeria to participate at the Gold Coast 2018 Commonwealth Games in Australia, which begins on April 4.