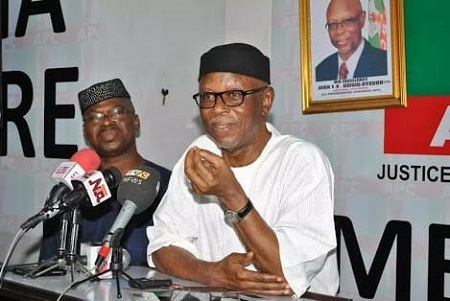 Chief John Odigie-Oyegun, APC National Chairman, has described as “absolutely childish”, the endorsement of former governor of Edo, Mr. Adams Oshiomhole, by South-South stakeholders to take over from him.

He told newsmen at the party´s National Secretariat in Abuja on Tuesday that it was “childish, absolutely childish’’.

Voting is done at convention and not in State Houses or in Government Houses,” he said.

Odigie-Oyegun, who did not confirm if he would seek re-election as APC national chairman or not, however, said he had concluded consultations and would make his decision public in a few days.

“The consultation, I think is concluded; I’m going to make it known when the convention committee announces their programmes.

“Then when I am going to buy a form, if I will re-contest I will let you know,” he said.

There have been speculations that both Odigie-Oyegun and Oshiomhole among others are in the race for the APC national chairmanship position.

The News Agency of Nigeria (NAN) recalled that the Forum of South-South APC Stakeholders held a meeting in Benin on Monday where some states in the region endorsed the candidacy of Oshiomhole while others declined.

Odigie-Oyegun, however, said those who endorsed Oshiomhole had their reasons which should be respected, saying that there was nothing wrong in the endorsement.

He, however, said that he was not bothered by the development.

“I will grant a comprehensive interview to you when the time comes.

“One of those who wants my job is from Edo and he was the immediate past governor and he was very instrumental in installing the present governor.

“So, I think it is a case of rub my back, I rub your back’ that is playing out;” he said, adding that he was not bothered by the development,” Odigie-Oyegun said.