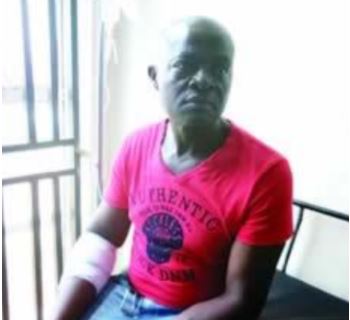 According to a report by Punch Metro, there was pandemonium in Anara, in the Isiala Mbano Local Government Area of Imo State on Sunday as two policemen allegedly shot two persons during a traditional wedding.

The development, our correspondent learnt, made guests to abandon the ceremony and run for dear life.

The two policemen, whose identities had yet to be ascertained as of press time, were said to have escorted two prominent persons to the event.

It was gathered that the trigger-policemen were whisked away by members of the bride’s family who prevented a mob from attacking them.

Punch Metro reports on Monday that the policemen, who were said to be at large, did not get the approval of the state Commissioner of Police to be at the occasion.

A witness, who identified himself only as Ugo, said the cops had first shot into the air before mistakenly firing at guests.

He said, “The policemen were shooting into the air to impress their bosses, who were spraying money at the party.

“One of the cops was using one hand to shot into the air with his AK-47 rifle. He lost control of the gun and shot in the direction of people.

“Two persons were injured. While one was shot in the hand and waist, the other person’s hand was shattered by bullets. They later became unconscious and were taken to the Emergency Unit of the Imo State University Teaching Hospital, Orlu.

“The youths wanted to lynch the policemen, but the bride’s family intervened. They were also prevented from vandalising the two cars of the men who brought them to the wedding.”

Nurses were seen attending to them.

An aged woman, who was later discovered to be the mother of one of the men, was seen crying and rolling on the ground, while some persons believed to be the victim’s children consoled her.

Enwerem noted that the policemen came from Ekiti State and ran away from the scene after the atmosphere became charged as violent youths attempted to mob them.