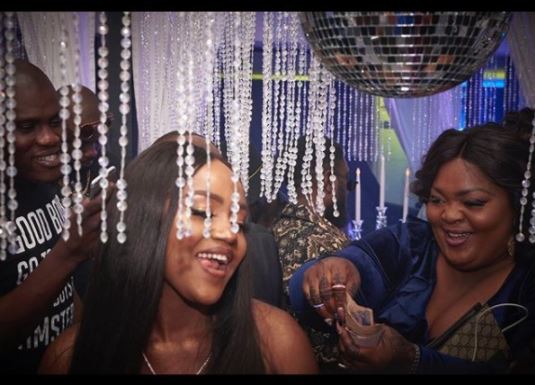 This can be seen in a picture above showing her spraying money on Chioma who had her birthday recently and was presented with a multi million naira Porsche car by Davido.

It would be recalled that she used to be friends with Sophia Momodu until a misunderstanding on social media tore both of them apart.

Sophia had posted pictures of cakes she got from friends on her birthday when a comment from Eniola Badmus was mistaken for a diss.

Reacting to the pictures of the cakes, Eniola asked why Sophia didn’t opt for elite eateries, like “Red Lobster, Olive Garden, or even Apple Bees?”

Mistaking the comment for a diss, Sophia fired at her:

“How you gon be salty cause I eat whatever the f*ck I want and you can’t h*e. I have wayyy too many responsible people in my life. They won’t let me put this fat, salty hoe in her place. Always talking about people and stay kissing their ass. Fool! Boss ladies don’t beg for love”

“They don’t beg for d*ck either. Sit you cellulite ridden a** down and be humble”

Seeing that she stepped out of line and that Eniola was only joking with her, Sophia later retracted and tried to deny that the diss was targeted at the actress. 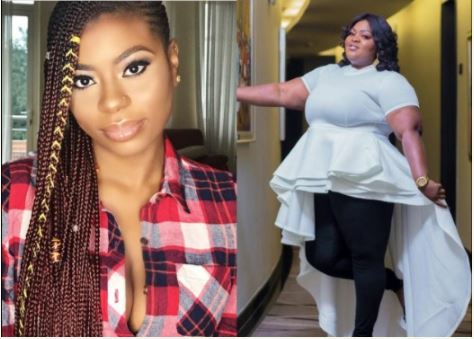 Well, after days of ignoring Sophie, Eniola finally responded by telling her to go and sin no more.

“I remember each and every moment we’ve spent together………. declare zero beef between us….. BADDOO x Sohia Momodu…. Heaven knows I luv David with all my heart based on that I believe everything associated with him should come by luv! Davido’s daughter is my daughter and the mother of his child is my sister. I luv you Sophia Momodu I love you with all my heart. Zero beef we sh0uldn’t allow the Devil come between us we’ve come a long way. Go and sin no more!.”