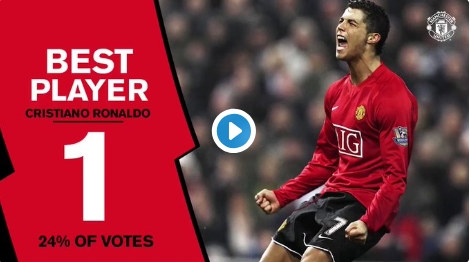 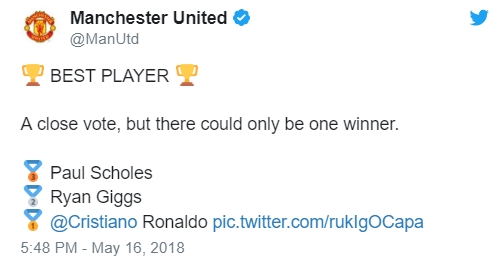 Cristiano Ronaldo has been voted Manchester United’s best ever Premier League player, but fans have been left far from impressed by the results.

United asked fans to vote on four categories to celebrate their 1,000th Premier League game on the final day of the season against Watford.

Supporters were asked for their best goal, best game and best save, alongside the title of best player to pull on a United shirt since August 1992.

The first three voted all proved relatively straightforward, with Wayne Rooney winning best goal for his acrobatic effort against Manchester City, United’s 4-3 win over their neighbours in 2009 being voted the best game, and David de Gea’s incredible save from Juan Mata in 2012 getting the nod for best save.

However, much of the chatter around the results was reserved for Ronaldo’s award, with many fans pointing out there were several United players who had contributed much more in the top flight.

A number of fans took to Twitter to question the outcome, pointing to the Premier League titles Giggs and Scholes had accrued at Old Trafford, compared with the Portuguese.

And others suggested that the influence of Eric Cantona was much more important to the club than Ronaldo’s six-year stint between 2003 and 2009.

To be fair to the Real Madrid striker, he did pick up three Premier League titles, while also sweeping the board for top individual awards in 2008, winning both the Ballon d’Or and the FIFA World Player of the Year award, as well as picking up the Premier League’s golden boot for the 2007-08 season.

He will be looking to add yet more silverware to his cabinet before the end of the season, as he leads Real Madrid’s frontline against Liverpool in the Champions League final on May 26.