SCARY: Khizri Zapirov unwound his passenger window to reveal something terrifying inside

A video has shown the moment a driver stunned a passing car after winding down his passenger’s window to reveal something horrifying inside.

The clip shows the cameraman pulling up alongside the black BMW of Russian YouTube star Khizri Zapirov.

They ask what he is doing, to which he replies: “I’m taking my girlfriend for a ride.”

“Is she pretty?” the fellow driver then asks.

Khizri responds by winding down the rear window to reveal a fully-grown tiger. 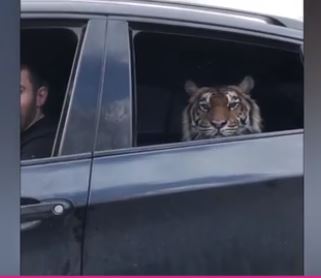 “Look for yourself! Do you like my pussy cat?” he asks as passengers watching in the other car burst into hysterics.

The tiger stares directly at the camera, before one of the people watching shouts: “Yeah, she is interesting alright!”

More than 1.3million people have watched the clip, which was titled: “Khiza knows how to deal with pussies”.