Waje wrote an open letter on Instagram yesterday, advising young people seeking success and that it’s not as glamorous as they think. 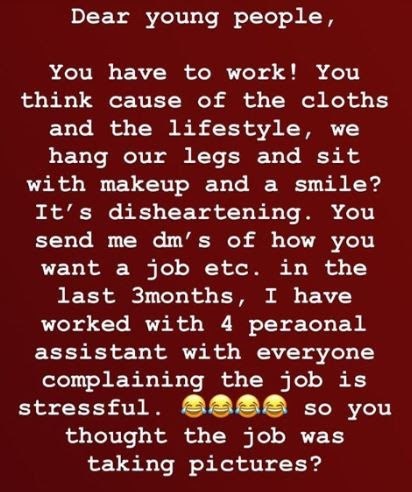 Earlier today, we reported that her personal assistant had responded to the above post, saying she almost lost her life working with her. 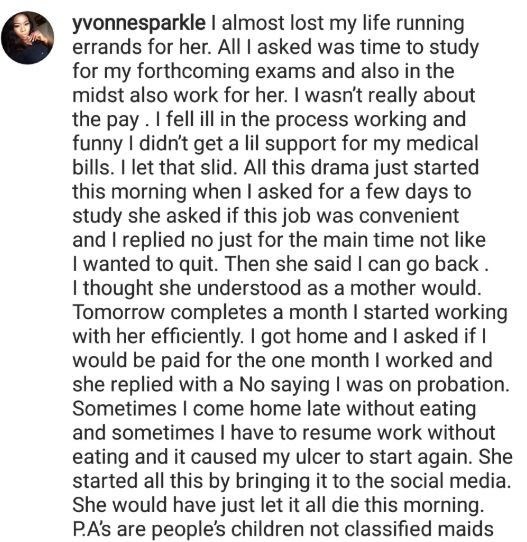 The Personal Assistant, identified as Yvonne Imongan has now sat down for an exclusive with Tope Delano of Kokolife.ng as she opened up more on what really happened between her and Waje.

Read excerpts from the interview below:

Tell us your side of the story?

I have worked with her for a month. Today makes it a month I started working with her. When I got the job, initially she told me I was on probation, but she didn’t tell me I wasn’t going to be paid.  She told me I was going to have 50,000 for my first payment and after six months, she was going to increase my salary.

I started working with her and in between fell sick. I normally had ulcer. Working with there was very stressful but I didn’t complain about the stress, because it was my first time working as personal assistant. When I started the job, I feel sick and had internal bleeding because of the Ulcer.

She ordered for me to be taken to the hospital but there was no support. I kept mute about it. My friends encouraged me to quit my job but I didn’t listen and kept working. Before that, I wasn’t aware that I was going to write an exam, because I am a graduate. I got the information from my parents, telling me I was going to write an international exam.

I begged for the date to be shifted because I need to work, and it being my first month, I was expected to be active. It was then shifted. I asked her for a couple of days off for the exam but she replied no, adding that she couldn’t compromise. She also asked me if it was convenient for me. I told her that presently it wasn’t convenient because I had a lot of things to do, but I wasn’t quiting my job.

I wanted to be able to study and work, because I worked through all the busy schedules. She told me to go home, but I didn’t go home immediately because I was confused. When I eventually got home, I sent her a message asking her if I would get paid for the work I had done and she said “no, my dear”, because I was on probation.