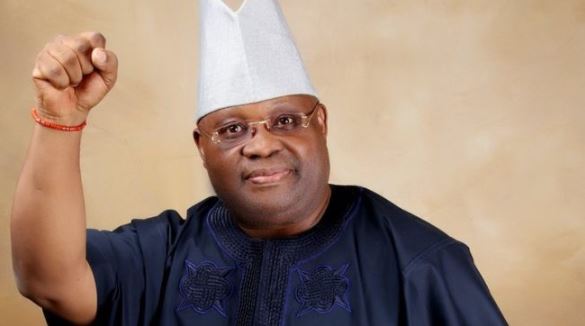 The choice of the Peoples Democratic Party (PDP) senatorial candidate in Osun-west for the 2019 general elections has resulted in a conflict of interests among contenders.
The contest is between a former PDP governorship aspirant, Akin Ogunbiyi, and the director of the PDP governorship candidate’s campaign organisation, Lere Oyewumi.
Mr Ogunbiyi lost to Ademola Adeleke in the Osun State governorship primaries.
Mr Adeleke eventually came second in the governorship poll held in September while Gboyega Oyetola of the All Progressives Congress (APC) was declared the winner. The PDP candidate has vowed to challenge the result in court.
It was reported how Messrs Adeleke and Ogunbiyi, in a meeting facilitated by Senate President Bukola Saraki, signed a peace agreement to put an end to the rivalry between the duo so as to combine forces to defeat the APC candidate in the Osun State gubernatorial election.
Speaking with a reporter on Wednesday, the press secretary to Mr Ogunbiyi, Ismail Afolabi, stated that the PDP national executive council had given his principal an automatic senatorial ticket following a deal struck to work with Mr Adeleke in the last election.
“The state and national leadership of the party steered clear of the exercise on the premises that the ticket has been conceded to Dr Akin Ogunbiyi, the second runner up in the party governorship primaries.
“In a Memorandum of Understanding, the national leadership of the party had ceded the senatorial ticket to Ogunbiyi after his fallout with Senator Ademola Adeleke, the governorship candidate of the party at the just concluded election in Osun. We were just waiting for the affirmation on Wednesday,” he told a correspondent.
It was gathered that hoodlums, armed with guns, machetes and charms, disrupted the senatorial primaries scheduled for Tuesday and Wednesday before the arrival of the PDP National Working Committee (NWC).
The faction that sponsored the hoodlums is yet unknown as both parties (Messrs Lere and Ogunbiyi) are pointing accusing fingers at each other.
Meanwhile, Mr Lere, who spoke with a reporter, said Mr Ogunbiyi is afraid to slug it out at the primaries because he is unpopular.
“Let us see who has more delegates. He is afraid because he knew he would not win in the primaries. That is why Ogunbiyi is seeking an automatic ticket,” he claimed.
Breach of Agreement
Both Messrs Lere and Ogunbiyi have raised allegations of breach of agreement against one another.
According to Mr Lere, in the pact signed by Mr Adeleke and Mr Ogunbiyi, the latter was promised an automatic senatorial ticket if he is able to deliver his local government for the governorship candidate in September 22 gubernatorial election.
“Instead, he worked against us. Throughout the whole governorship campaign, he didn’t follow us to any of the places we visited. All we needed from him was his local government, which will attract the automatic ticket.”
Mr Lere added that he would not have contested if Mr Ogunbiyi had fulfilled his part of the agreement.
“I would not have contested if he had ‘delivered’ his home for us. What will I be looking for after being the director general for Adeleke’s campaign organisation?”
“Immediately we lost the election, he travelled out of the country. Now, he has been frequent in Abuja to solicit an automatic ticket. Those in Abuja too are not idiots. They said he has reneged in his promise,” Mr Lere told a reporter.
Meanwhile, this newspaper reported that PDP lost to APC in Ayedaade local government as 9836 votes were recorded by PDP while APC had 10861 votes.
On the other hand, Mr Ogunbiyi accused Mr Lere and the Adeleke campaign organisation of breaking the pact signed, by secretly obtaining the form to contest for the senatorial ticket in the first place.
“This is one of the reasons why Omisore refused to work with the Adelekes because they can’t be trusted. They wanted a win-win and that made them to obtain the form without our knowledge. They betrayed the agreement,” Mr Ogunbiyi’s press secretary, Ismail Afolabi, lamented.
Speaking on the inability of Mr Ogunbiyi to deliver his constituency, Ile-Ogbo in Ayedaade local government, for PDP, Mr Afolabi said Mr Ogunbiyi did not want it that way.
“What happened in Ilè ogbo, was a protest voting against PDP. Dr Ogunbiyi himself didn’t want it that way. Unlike the usual practice, he spent his own money on the election.”
“More so, the people were aware of the insincerity behind the senatorial ticket and weren’t really pleased to remain in PDP. I was at the collation centre till about 2:30 a.m. on the Sunday after the election on Saturday. It’s not our fault,” he said.
In the midst of this confusion, the national and Osun State PDP executives have remained silent over the promise of an automatic ticket and the conduct of the Osun-west senatorial district primaries.
In a telephone conversation with a correspondent, the PDP National Organising Secretary, Augustine Akobundu, noted that he could not speak on the issue as they are yet to get a report from the NWC.
“We’ve set up a committee to see to the conduct of the primaries in all the states and we are yet to get a report from Osun State,” he said.
Meanwhile, the Osun State PDP publicity secretary, Bamidele Salaam, when contacted, told a reporter on Wednesday evening that he is not in the best position to comment on the issue.
The Osun State PDP chairman, Soji Adagunodo, did not pick several calls put across to him and has not responded to text messages sent.