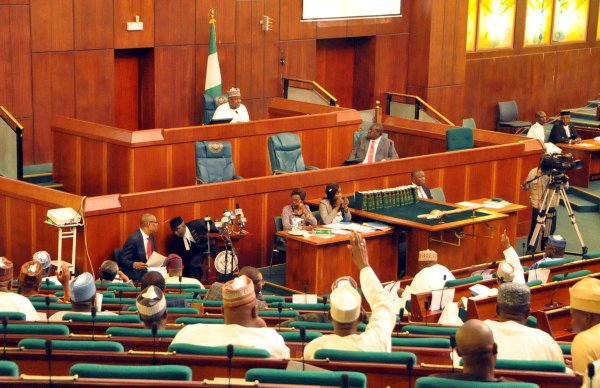 The House of Representatives on Tuesday resolved to investigate the raging crisis at the National Health Insurance Scheme, Punch has reported.
An ad hoc committee of the House has been empowered to conduct the investigation within four weeks.
The resolution came following a motion of urgent national importance moved by a member from Bayelsa State, Mr. Diri Douye.
The session was presided over by the Speaker, Mr Yakubu Dogara.
The Governing Council of the NHIS and its Executive Secretary, Prof. Usman Yusuf, have been embroiled in another dispute in the latest phase of the crisis.
The Council, which is chaired by Dr Onyantu Ifenne, had last week suspended Yusuf from office over allegations of “fraud.”
However, on Monday, Yusuf dared the council by forcing his way into office at the agency’s Abuja headquarters.
He was said to have been given security cover by about 50 armed policemen, amid protests by workers of the NHIS, who were also split into pro-Yusuf and anti-Yusuf camps.
Debating his motion on Tuesday, Douye told the House that the NHIS, a “very critical healthcare agency”, had been turned into a “theatre of war.”
He stated that the council raised some allegations against Yusuf, including infringement of procurement processes by “illegally attempting to execute N30billion Federal Government bond.”
Douye also recalled how the ES was twice queried earlier in the year by the Minister of Health, Prof. Isaac Adewole.
“Part of the query was that he spent N17million on a trip outside the country. He was suspended.
“But, he was surprisingly recalled by the Presidency.
“Our country is becoming a banana republic. Let us investigate this crisis and the operations of the NHIS,” he added.
But, a member from Plateau State, Mr Edward Pwajok (SAN), drew the attention of the House to the Establishment Act of the NHIS, arguing that the ad hoc committee should also find out whether the Council had the powers to suspend the ES.
Pwajok specifically referred to Section 8 of the Act, which he said gave the President the sole power to appoint the ES.
“The law provides that Mr President shall appoint the ES on the advice of the Minister of Health.
“It is the person who appoints that can also suspend. The committee should first look deeply into this area as well,” Pwajok said.
The committee will summon Adewole, Yusuf and Ifenne to appear and testify at the National Assembly.