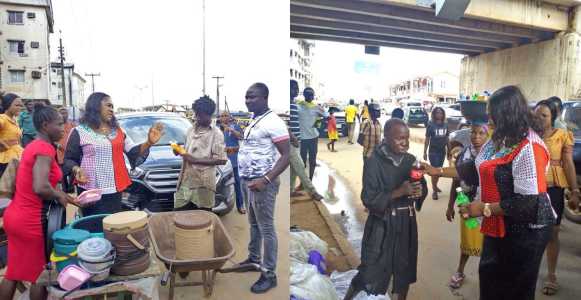 In compliance with the directive of the Governor of Anambra State, Chief Willie Obiano, to rid the streets of Anambra of mentally ill persons, the Commissioner For Children and Women Affairs, Lady Ndidi Mezue, on Wednesday, participated in the raid that netted a number of mentally challenged individuals, who were picked up and relocated to Nteje Home for mentality challenged persons.

One of the mentally challenged persons was tracked from the popular Unizik junction Awka,to Amawbia, before the team were able to apprehend him. From the information gathered from the man who is in his early twenties, he is from Edo State.

The subsequent raid that was carried out under the Aroma flyover, Awka, netted an elderly mentally challenged woman, who explained that she is from Lagos State, and was dropped off in Anambra by her uncle. Surprisingly, a search that was carried out on the woman’s luggage, revealed some bundles of Naira notes in different denominations suspected to be proceeds from begging activities.

The commissioner insisted expressed displeasure with the manner in which people are brought into Anambra State to carry out activities such as begging.