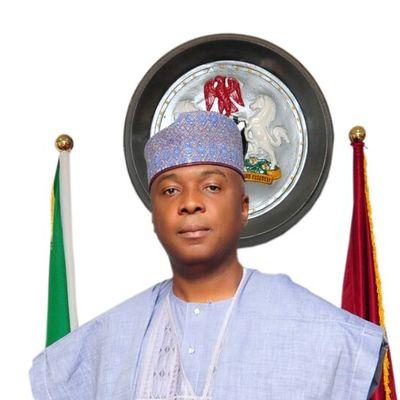 Saraki is quintessential leader with an intimidating track record of achievements. We have arrived the garden city where the presidential candidate of PDP will be elected. It is a great event that will determine and shape the future of Nigeria. His Excellency Dr. Bukola Saraki is a man that has been aptly described as a man for this season. A man that has inborn proclivity for leadership.
Let’s draw comparison between the depth achievements and antecedents of both Dr. Bukola Saraki and his late father Dr. Abubakar Olusola Saraki. He has an exemplary pedigree that is important for this type of post. His late father, Dr. Abubakar Olusola Saraki was a medical practitioner and Bukola Saraki is a medical doctor. His father was a leader of the Senate and he is the Senate President. His father was Waziri of Ilorin and he is the Waziri of Ilorin.
Only a very few successful politician can point to such a magnificent record. Besides, he has been a two term governor of Kwara State. He was a Chairman of the Nigerian Governors Forum. As a senator, he is currently the Senate President and the Chairman of the National Assembly. Prior to that, he was a Special Adviser to President Olusegun Obasanjo on Budget Affairs.
On the virtues of Saraki and the impression of Nigerians, particularly the youth about the Senate President, he is a great, confident, courageous, competent and cerebral personality. He is a shining light in the political firmament of the PDP.  Having gone round the country with Dr. Saraki, I am amazed at the level of his acceptability in virtually every zone of the nation. Abubakar Bukola Saraki has become a national phenomenon and his ideology and policy to grow Nigeria has become a doctrine especially amongst young Nigerians.
Even some of the Northern elders are fully in support of Bukola Saraki because many of them feel that his late father lived and died for the north. When there were signs of disunity in the north, the late Oloye traversed the length and breadth of the north to bring everyone together. Many people in the north, particularly elders now feel that it is about time to pay back the late Olusola Saraki with a good measure by supporting his son.
On the chances of Saraki in the convention on Saturday, we are here to compete fairly and contest with all seriousness. We recognize the obvious potentials of fellow aspirants. Virtually every of PDP aspirant is incomparable with leadership of the incumbent political party. Bukola Saraki has a wide range of support within the rank and file of the PDP.  A clear majority of serving state governors in the PDP are backing Bukola Saraki. And this is a very determinant factor on who emerges the party’s flag bearer on Sunday.
The message of Saraki, which is inclusiveness, equity and the programme to grow Nigeria is unrivaled and this is what he has consistently preached all over the nation. This has no doubt found great acceptability amongst the delegates and the people of Nigeria.
The convention is a contest of champions. Each of the aspirants is a champion in his own and what we are having on Saturday is a battle of champions from which one will invariably emerge. And the overall champion at the end will be Dr. Abubakar Bukola Saraki.
Doyin Okupe is Chairman, Media Campaign of Sen. Bukola Saraki
AdvertisementABUJA DOCTOR REVEAL THE UNIQUE WAY TO PERMANENTLY CURE WEAK ERECTION, SMALL AND SHAMEFUL MANHOOD AND INFERTILITY ISSUES WITHOUT SIDE-EFFECTS WITHIN SHORT PERIOD!! DON'T BE A VICTIM!! Click Here for More Details