The most recurring question that have come up since I decidedto contest the position of the president of Nigeria has been the issue of structure. I hear it all the time everywhere I go, from family, from friends, on the Internet and offline, in hushed whispers and in the worried voices of people who express their fears to me personally. 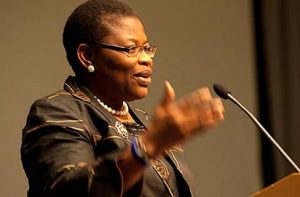 How is she going to win? Does her party have the reach or the structure to go all the way and carry the day eventually?

But you see, these questions, while valid, all come from a place of trepidation. Trepidation at how truly powerful the office of a citizen is and the possibilities that can happen when this power is unleashed. The truth is that you, my fellow citizens, are all the structure that we need to make this happen and this isn’t some lofty ideal. It is very possible through difficult but practical steps.

Let us look at the data. Data is something these old order politicians who want to rule forever haven’t bothered to engage with. Alimosho for example, is the largest local government in Lagos state with over 1.2million persons resident according to official census figures. In 2015, only about 650,000 of these people registered and obtained their Permanent Voters Cards (PVCs). Faced with the rather unattractive choice of voting for the Peoples Democratic Party (PDP)’s Goodluck Jonathan, or the anyone-but-Jonathan candidacy represented by Muhammadu Buhari, a great many voters chose to abstain.

At the end of the day, the #APCPDP, the twin terrors of Nigeria, only managed to conjure up 140,000 votes between them. In Almighty Alimosho. This says something loud and clear, that Asiwaju Bola Tinubu with all of his ‘might’ and experience in so-called grassroots politics could, at the end of the day, deliver only 86,897 votes for his candidate Buhari and their party.

Where then does the source of this his widely reported power come from? Isn’t he grossly overestimated? Asiwaju Tinubu and his like in #APCPDP control only as much as we let them. And the situation is the same in every other part of the country- from Kano to Ilorin- where any godfather claims to hold sway.

These men are only as powerful as we, the citizens let them be. They have been getting away with this for so long because we outsourced our responsibility as voters to people who do not necessarily represent our best interests.

The biggest trick that these entrenched politicians have played on us is to convince us of their invincibility, and we permitted them. This stops NOW!

The data shows otherwise. The 500,000 persons in Alimosho who were so unimpressed by the #APCPDP that they refused to come out to vote are the numbers who will probably decide the 2019 elections. They are the numbers my campaign is seeking to activate. Everyone has one vote only and we would work hard to earn the votes of these Nigerians who care enough about their country to be wary of giving their votes to a bunch of self-preserving and recycled polo-trickians who have had several years to deliver dividends to the people but failed woefully.

The #APCPDP and the revolving door of politicians that they represent sell us lies of invincibility to convince us to remain bystanders in our most important civic duty. They want us to remain at home, disinterested and disillusioned while they pillage the country and loot our resources. No more.

Our movement offers a clean break from all of the old ways. But everyone of us has to get involved. It is not something Obiageli Ezekwesili alone can do and it is certainly not going to be business as usual. Everyone who has a PVC has an investment in the process and has a duty to get involved.

An Oby Ezekwesili presidency will not only work to create an enabling environment for our young people to explore their greatest potentials and be globally competitive, but they will actually power the government. Building our young human capital will be an urgent priority of our ACPN government. We have an agenda to transform 20 Nigerian universities into world class institutions with strong showings on the global rankings.

These people are still talking about oil when the world is counting down to the end of the oil economy? In fact, we should just give them the oil to drink since it is what they really want so that they can leave alone to focus on the work of rebuilding our economy.

Our agenda is about creating wealth – growing the pie exponentially, creating jobs, building shared prosperity and taking at least 80 million Nigerians out of poverty. The agenda is to mobilize the energies of the people and our private sector, invest in upgrading our capacity capabilities to compete globally, and end the bad policies which have turned Nigeria into Poverty Central.

Importantly, our actions will center on mobilizing the youth, building and adopting science and technology to disrupt the status quo in every sector including governance, implementing the reforms and reorganization to reduce bureaucracy, and making government a partner instead of an enemy of progress. This will in turn create jobs, turbo charge businesses and fight inequality.

I have crafted and implemented multi-sector policy to transform the lives of those at the bottom of the pyramid. I have visited around this country. I have seen the poverty, audited the opportunities, and created solutions that have kept us from crashing. These men don’t know the grassroots like I do. These guys only have experience in compromise and corruption. My own experience is in caring for people and rebuilding nations.

As minister of solid minerals I led the repositioning of our mining possibilities for private sector leadership, cleaned up the chaotic mining titles registry and had Nigeria commended globally for leading on transparency in the mining sector when we established the Nigerian Mining Cadastral Office. Then I terminated the power of the minister – my own power – to award mining licenses as he or she pleases. I supervised the comprehensive geophysical survey of the country that generated basic data on number of minerals (34) and number of locations (430) across the length and breadth of Nigeria, opening up massive opportunities that we as a nation continue to enjoy. These are verifiable facts; the records are available.

I was education minister for less than one year, but in that time, we embarked on the most comprehensive reforms Nigeria has seen since 1999. We revamped the Federal Inspectorate Service and began the first ever nationwide inspection of secondary schools. We built the Nigeria Education Management Information System, collecting data and using it to analytically plan and make education policy. We introduced the private sector supported Entrepreneurship Studies as a compulsory General Studies course in all higher institutions. We started work on structural reforms of our curricula to position education as a key driver of transformation by linking curricula at all levels of education to the nation’s social and economic imperatives. We introduced Public Private Partnership models for education service delivery and very importantly ensured that Innovation & Vocational Enterprise Institutions were accredited, certified (National Innovation Diploma and National Vocational Certificate) and regulated by the National Board for Technical Education.

The #Hope2019 movement that I promise, isn’t built on fraud or deceit. It will not operate on unfulfilled potential and countless missed opportunities. Rather it is one of collective effort where every single voter is empowered to fight and take responsibility for fixing the rot in our system. It is about collective action of our citizens.

We are moving to different parts of the country with our message of hope, progress and prosperity. My record is there, and it is one of excellence across public, private and development sectors. We have to deliver a working Nigeria that works for you and I.  We can do it.

The strategy is to unlock a vast and impressive network of ‘’sleeping voters’’. Do you have your PVC but are distraught about the prospects of returning #BuTiku, the siamese twins of failure and incompetence to power? We are talking to you. Do you feel like you have been set up to choose the lesser evil between the devil and the deep blue sea? You shouldn’t.

This is not a time to go to sleep. We not only have the only credible alternative candidate but, we also have the technology and the massive data network. We have the reach. We shall find you, identify you and convert your efforts into votes, voters, canvassers and small donors.

The responsibility of deciding our leaders cannot only fall to the rural areas alone, as has become the pattern in previous elections. Those of us in the cities and in the urban areas need to be alive to our responsibilities. The godfathers are unlikely to sway our minds with cheap gifts but we need to be motivated enough to do the right thing. We need to mobilize, get the votes out and protect them come election day. It will be challenging no doubt but the road to nation building has never been easy.

It isn’t enough to decide to vote. There are millions of people, similarly challenged who need to be convinced, not only in the authenticity of our cause but in our practical road map for victory. And make no mistakes, we are in this to win it.  We are in this to fight for our country – to rescue Nigeria from the hands of a failed political class. No frills, no excuses, just the back breaking work that will deliver a country that we can all be proud of.

We will be knocking on doors, please open to us. We will be selling our message please listen to us. But we cannot do it alone. We need a committed team of volunteers and supporters that will be prepared to go door to door, taking our message to those who need to hear them. We will need the resources to make this happen so we will be asking for your support, in all the ways that are possible- talent, skill, resources- whatever it takes to deliver the vote.

At the end of the day, 2019 will be decided by the incredible hard work and community that we create together, not the godfathers and their impoverishing brand of politics. Not the hollow promises of people who have only delivered incompetence and corruption. They will see us coming but will be unable to stop us because we shall finally unleash the power of the people, united for a cause.

We have the message, the power and the word of truth, and the right side of history to win the elections. Now we need you to play your own part. Just do it now.