The Nigerian Navy in Port Harcourt has reported the rescue of a two-month-old baby and 11 others from drowning in Ngo waterways in Rivers State.

He said troops on routine patrol of the waterways sighted a capsized boat and immediately intervened to rescue the 12 passengers.

It is gratifying to state that all 11 passengers and the baby were rescued with no casualty recorded. 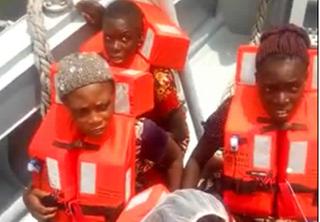