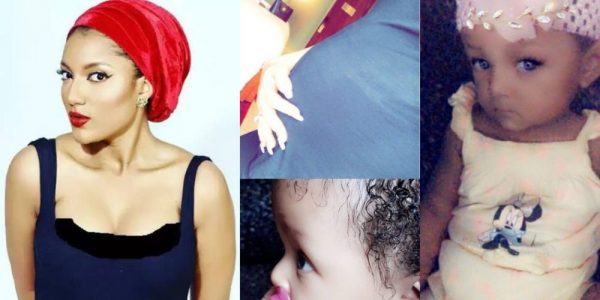 2017 BBNaija housemate Gifty has again slammed claims that singer Mr 2Kay is the father of her daughter.

Recall the pair got into a heated social media war over the paternity of the child with Mr 2Kay claiming he is her father.

Well, during a question and answer session with fans, Gifty made it clear the singer is not her baby daddy adding that Canadian rapper Drake is. 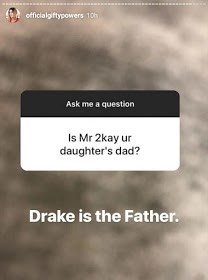 Not stopping there, Gfty went on to talk about her ex-husband saying he is impotent and that she got divorced within a year. 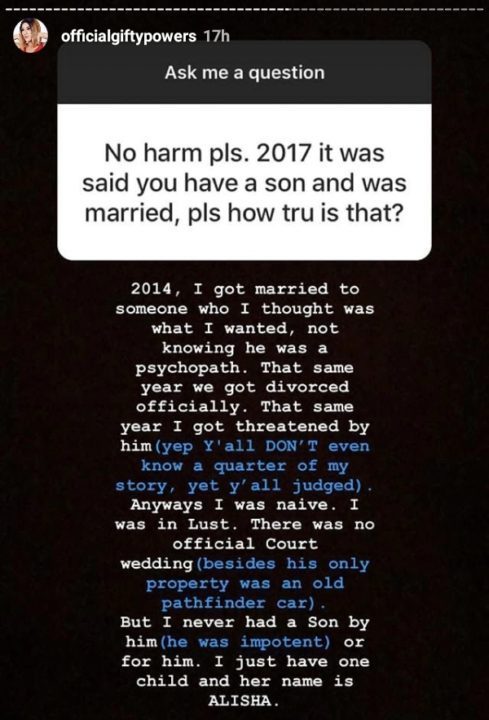 Recall in an interview with Vanguard, the model spoke about her man saying;

So, to answer your question, I’m keeping the identity of my daughter’s father (my husband) because we always protect those we truly love,”

“This is my second marriage and yes, it is official and ordained by God. Well, my first marriage was never official (which I thank God actually).The truth is, everyone is trying to make a name just by playing unnecessary stunts available on ground.

Now, everyone is entitled to their own point of view whether ugly or stupid, but that doesn’t matter to me. I’ve got lots on my plate, especially now that I have a daughter in my life, that’s my number one priority and it will always be.

But I will cross millions of miles if any soul drags my daughter’s name or tap her unnecessarily, whether knowingly or unknowingly, she’s my life. So any talk is pointless,” she said.