Nollywood Actress, Cossy Orjiakor has reacted to the raid of Caramelo strip club in Abuja.

The raid which took place at Caramelo strip club Utako last week wednesday, on the basis of public nuisance, got over 34 strippers manhandled and some forced into security vans stack Unclad.

On sharing the video of the incidence, she wrote;

Bleep @naptipnigeria how can this happen under ur watch. Our sisters and mothers deserve better. Caramelo strip club Utako raided just because the building is supposed to be a clinic ….what has that got to do with manhandling strippers and guest ….Stupid ass people they want in on the action was it an orgy. guess u want them back to the road side where some will be bleeped for peanut and used for rituals . Enemy of progress …Is it your body. Give to ceasers what is ceasers and to God what is gods. Pervert….sick crazy ass stupid people in government. Instead of u guys to go there daytime and lock up the premises , u waited in till night so as to shame ur mothers … ur sisters … ur children… Go Bleep ur selfs.. pls tag all the fools and tell them well done sir � for violating the basic human right of all the women in this video 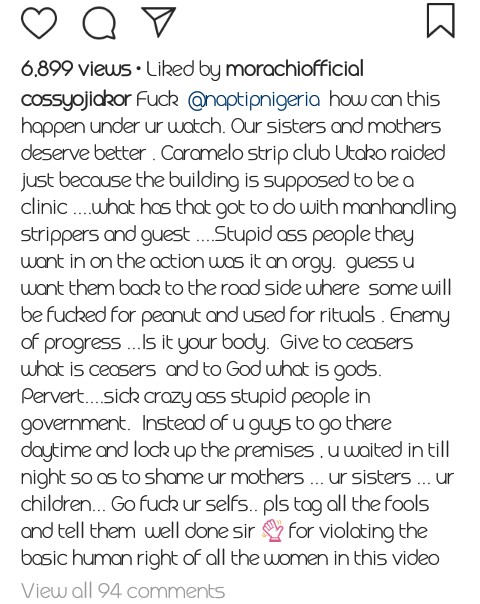